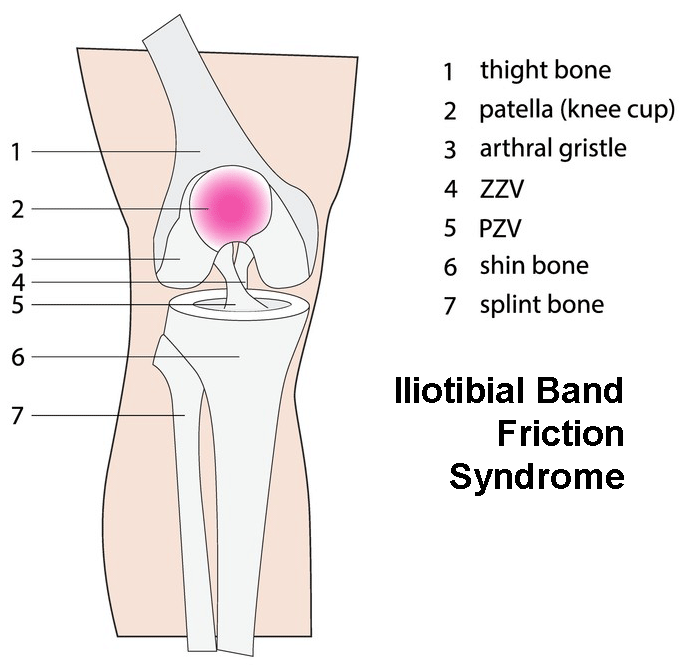 Illiotibial Band Friction Syndrome, often abbreviated as ITBFS, is a pain on the outside of the knee during running or walking as the distal end of the IT band rubs back and forth over the femoral condyle (boney prominence). This is particularly irritating when the knee is bent 30 degrees, which happens just as the foot makes contact with the ground.

Sometimes referred to as runner’s knee, illiotibial band friction syndrome is a common cause of knee pain in runners and cyclists.

The structures involved are the iliotibial band, which is a thick band of connective tissue that runs down the side of the leg, and the femoral condyle, which is a boney prominence just above the knee-joint line on the outer side of the knee.

ITBFS is caused by improper running mechanics, which are a result of muscle imbalances and poor alignment in the hips, knees and feet. Ultimately if the lower chain does not have the perfect combination of strength, posture and balance, ITBFS can result.

The most common symptom of ITBFS is pain over the outer part of the knee which worsens with running and initiating a knee bend.

ITBFS should begin to clear as the training regime is tweaked and emphasis is put on facilitating the correct muscles. For endurance runners, such as marathoners, this problem may take longer to heal as the demands placed on the body are greater and the rest periods are shorter.

As with any overuse injury, the focus is first on correcting those training errors and reducing muscle imbalances. Consulting a physiotherapist may help you determine what needs to be strengthened, what needs to be inhibited or stretched and how your foot should be striking the ground.

The goal of treatment is to restore alignment so this friction on the outside of the knee is reduced. If the problem is structural, such as flat arches, a member of the Apex team will be able to analyze your gait and fit you for custom orthotics using our innovative digital gait scan system. Acupuncture is also a great tool at decreasing pain using your body’s pain modulating properties and activating inhibited muscles.

What Can I Do At Home?

When running outdoors, make sure you switch which side of the street you are running on so you can change the ground reaction forces on the body. Roads are banked to allow water drainage so continuously running in the same direction will actually cause a subtle alteration in posture that will be reinforced over time.

Next, make sure your running shoes are appropriate for you. If you have flatter feet you will need shoes with a more firm arch support. If you have excessively high arches, a softer insole will help cushion some of the impact when running. It’s also a good idea to strengthen the core and glute muscles because a strong core will support the movement of the legs and helps reduce vibrations.

Finally you should spend some time working on foot intrinsic strengthening, such as calf raises and balance exercises to help support the arch of the foot and prevent the knee from collapsing inwards.